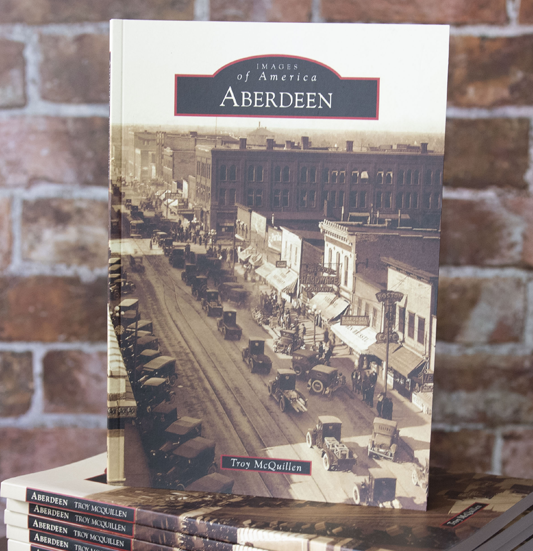 The Industrial Revolution, along with free land, created fierce competition among American railroad companies to connect the country with a web of track. Goods, as well as people, needed to be transported. The railroads would create towns, then profit from the sale of the land and transporting of people and goods. The plan worked brilliantly, as there were no other means of transportation – or roads – to these new communities. Aberdeen, platted in 1880, was known as an “end of line” stop for several years. During this time, the town boomed into a city. Main Street sprawled southward, and wooden boomtown businesses were quickly replaced with elaborate brick buildings, some six stories tall. Examples of Aberdeen’s eclectic style of architecture, spanning nearly 60 years, can be found within Images of America: Aberdeen. Many of these treasures still exist today; others, along with their lost stories, are forever preserved here. The book includes over 200 historic photos of Aberdeen’s Main Street, side streets, churches and a few other landmarks. 2012, 126 pages, black and white, Arcadia Publishing.

Troy McQuillen, owner of McQuillen Creative Group and publisher of Aberdeen Magazine, is an Aberdeen community advocate who often gives guided walking tours of the city’s historic districts. He has many local historians to thank for laying the groundwork for this book. His great-grandfather came to Aberdeen in 1910 as the superintendent of the newly formed streetcar system. Troy is in the process of fully restoring/enhancing a historic downtown building that houses his creative business.